Blog - Latest News
You are here: Home1 / In The News2 / UNION JACK NEWSPAPER 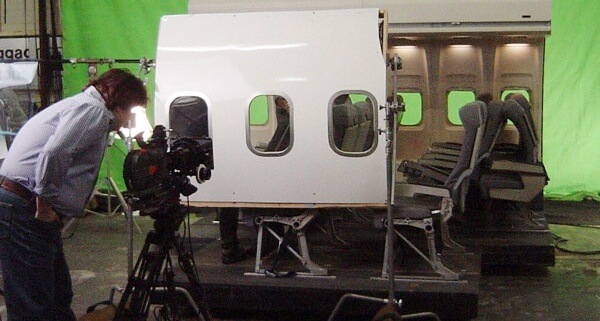 FROM THE very first days of the movies, airplanes and airports have been the backdrop for stories of love, horror, comedy and action, but if you’re a director or producer, where exactly do you go if you want your stars to film in a 747, snag a seat inside Air Force One, or fly down to Rio in a Lear jet?

The answer isn’t at LAX or any other airport – it’s right on terra firma at an anonymous warehouse in North Hollywood. Behind these doors lives a crucial player in Transformers: Dark of the Moon, Friends with Benefits, The Hangover Part II – all massive movies recently in theaters – while later this year they’ll be seen in the US remake of The Girl with the Dragon Tattoo and George Clooney’s latest, Ides of March.

Aero Mock-Ups, Inc founder and former pilot Richard Chan bought his first airplane interior in 1987, and soon after he acquired two more from the “747 stage” at Universal Studios. His haul from that legendary studio included the cockpit from the classic spoof Airplane!, though this mysterious clue – which now sits by the front gate – is only the beginning of a story that started over 20 years ago.