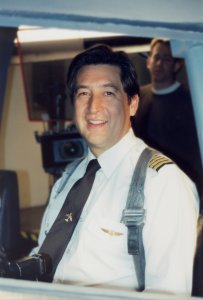 In addition to flying over 20 types of aircraft as a licensed pilot, Richard Chan has over forty years of experience in management, aviation training, maintenance and salvage for companies such as Flying Tigers, London School of Flying, Aircraft Salvage and Parts, Aircraft Spares and Hawthorne Aviation.

After acquiring his first airline interior in 1987, Chan developed unique modular, mobile airline sets. The success of this initial prototype led to the establishment of Aero Mock-Ups–now the premier supplier of airline interiors to the entertainment industry worldwide.

An avid supporter of passenger safety education, Chan has served as an expert witness for the National Transportation Safety Board and the Federal Aviation Administration. Chan is also an active participant on aviation advisory boards and safety symposiums with airline pilots and flight attendant associations, government agencies, researchers, manufacturers and operators.

Chuck has an electrical contractor’s license, a Federal Aviation Administration (FAA) Airframe and Power Plants certificate, and an FAA Commercial Pilots certificate (multi-engine land rating). He has been an Aircraft Accident Investigator and an expert witness, as well as owner of an aircraft salvage business.

Chuck is a retired Electrical Engineer.

Drew McAnany was born to an Irish father and an Italian mother in Philadelphia. As a child, he discovered a passion for acting, but it wasn’t until his freshman year of college that Drew found passion #2 in screenwriting.

After packing his bags and moving to LA in 2009, Drew became Alan Mruvka’s assistant. Alan enjoyed Drew’s witty banter so much, he decided to have Drew host the red carpet interview segments for his network, thelooktv. After the network ceased, Drew focused on writing and has completed 7 features and 2 television pilots.

½ New Year is Drew’s first feature that he’s written, produced and played a lead role in. The film follows a group of friends dealing with relationships and adulting during their annual 1/2 New Year party. Drew’s co-stars with Bo Youngblood, Shanley Caswell, Rome Flynn and real life ”big sister” Brooke Lewis. For Drew’s leading role, he was nominated for the Orpheus Award for Best Performance at the 2019 LA Greek Film Festival and Best Actor at the 2019 FirstGlance Film Festival.